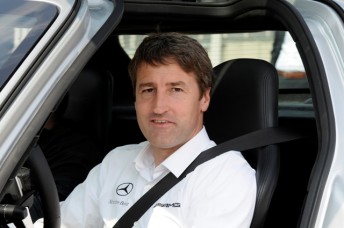 Erebus’ second car will be crewed by two of its V8 Supercar drivers, Lee Holdsworth and Tim Slade, who’ll be joined in the #63 by the squad’s GT regular Peter Hackett.

Slade and Hackett teamed with Dutchman Jeroen Bleekemolen and American Bret Curtis to finish second in last year’s 12 Hour aboard an Erebus-crewed SLS.

Schneider meanwhile has some experience of the Mountain thanks to attending an AMG drive day event in 2008, and says he’s looking forward to attacking the course at racing speeds.

“I am very happy to be coming to Bathurst and racing with Erebus Motorsport,” said Schneider.

“It is considered to be one of the world’s greatest tracks, it’s a fantastic challenge for any driver, but to be part of this Erebus Motorsport team and chasing the 12 Hour victory for AMG Customer Sports is a very special thing.

“I enter the event with some momentum after winning the Dubai 24 Hour with Black Falcon and before that the win for Erebus in Sydney.”

Like Schneider, former FIA GT1 driver Jager is also familiar with Erebus having competed with the team at last year’s Armor All Gold Coast 600.

Roloff will be classed as the non-seeded driver of the international trio, but has solid experience with the SLS GT3 machinery in the VLN Endurance Championship.

The Liqui-Moly Bathurst 12 Hour takes place on February 10 and will be streamed live in its entirety on Speedcafe.com.