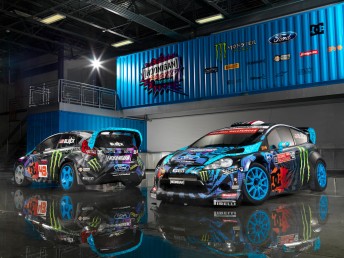 The internet rally sensation Block has decided to compete in a variety of disciplines this year, including entering the X Games, Global Rally Cross, Rally America, Gymkhana GRID and selected rounds of the World Rally Championship.

Block has committed to a full season in the Rally America Championship, while hopes to run up to three WRC events.

“I’m pleased to say that I’ll be campaigning the full Rally America Championship this year,” he said.

“In 2012 I made it out to two events and won both, as well as winning a Canadian rally. I’m confident that my team has built a highly capable car and that the experiences that myself and my co-driver, Alex Gelsomino, have gained doing WRC events the past few seasons really help us when it comes to making our pace notes for the races. My goal for the year is to win the championship, plain and simple.”

“It’s great to continue racing in the World Rally Championship. Last year I competed in three events and in two of them I finished within the top 10 and scored points.

“I really enjoy being able to stay somewhat competitive in WRC, despite only competing part-time and not being able to log any testing in the car prior to the actual events. Hopefully I’ll be running a similar amount of WRC events in 2013.”

Block also said that he has another of his famous Gymkhana videos in store, but was not willing to reveal too much detail at this point.

“I’m working on a very special Gymkhana project with DC for 2013,” he said.

“I can’t comment too much on it at this point, but we’re taking a very different approach to it for this year. That’s all I’m going to say right now!”

Block will be seen in Australia in the coming months when he brings his Gymkhana driving talents to the Clipsal 500 on February 28-March 3.