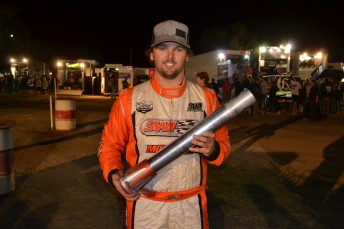 Jamie Veal has taken a spectacular victory at Avalon Raceway in one of the traditional pre-cursors to this weekend’s Grand Annual Sprintcar Classic – the President’s Cup.

With nearly 60 cars, including 15 American stars lining up for the event, Veal inherited the lead with nine laps to go when race long leader, Stephen Bell looped his machine.

The two Warrnambool-based pilots were fighting out the victory on a rapidly slickening surface. When the track was taking rubber late in the affair, Bell got caught out and spun midway between turns three and four bringing on the amber lights.

Getting home in second placing was Robbie Farr in the Eastcoast Pipelines machine. His car was setup perfectly for the conditions and should there have been more laps up his sleeve, the Perth-based Sydney-sider could well have got on racing terms with the Victorian youngster.

A solid third placing in the Wagga Mobile Cranes car was Grant Anderson who advanced from sixth place on the grid, whilst fourth was World of Outlaws star, Tim Kaeding in the Krikke Motorsport Sprintcar. Australian Champion, James McFadden rounded out the top five.

There were seven Americans in the 18 car feature race, including former Classic winner, Shane Stewart. Stewart did it the hard way after qualifying 36th. He had to charge his way through the non-qualifiers and then the B-Main to make the feature.

The non-qualifiers themselves could have represented the A-Main any night at a World of Outlaws race with Stewart joined by Daryn Pittman, Kevin Swindell and local hopes Nick Lacey, Brett Milburn and Jackson Delamont.

The win for Veal and third place for Anderson were a pleasant way to attempt to make up for their individual disappointments from the Australian Sprintcar Title 10 days prior at Archerfield Speedway and will no doubt give them extra confidence heading into the Classic on ‘home turf’ this weekend.

All teams will now transfer to Mount Gambier for Friday night’s King’s Challenge before tracking back to Warrnambool for the Grand Annual Sprintcar Classic, which has attracted a record 102 entries.