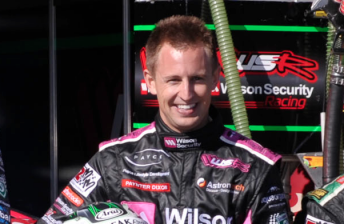 Chris Pither has secured a drive in the Dunlop Series with Brad Jones Racing.

Pither’s seat with BJR means that the Albury-based will enter two cars in the Dunlop Series this year, with Andrew Jones already committed to the second tier series.

Besides Pither’s Dunlop Series chance, he plans to continue to run a car in the V8 Utes Series for up and coming drivers.

It will be Pither’s second chance in the Dunlop Series after making his debut in 2006. His V8 Supercars career was put on hold in 2008 after crashing heavily in practice at Mount Panorama. He returned to Australian competition in 2011, winning the V8 Utes Series, and after securing a drive with BJR in last year’s endurance races, he says he is ready to step up to the mark.

“It’s definitely taken a long time to get back to this point. I didn’t drive in Australia at all for two years after the accident so I had a lot of time to think about it,” said Pither.

“Winning the ute championship with Ice Break was a massive achievement in itself and I was rapt with that so if I’d never made it back that would have ticked the box, but to do Sandown and Bathurst last year was pretty special for me.

“That was four years since I had driven a V8 Supercar so it was a dream come true for me and I was very grateful for the chance.

“I really enjoyed the races with the team last year. Brad Jones Racing is a great bunch of enthusiastic racers and everyone puts 100 percent effort in, which will be good this year. Hopefully it’s going to lead onto bigger and better things and I’m just so grateful to everyone who’s supported my comeback, Ice Break and everyone else.”

“We’ve worked with Chris for a number of years now and I’ve been impressed with his approach,” Garvin said.

“He’s clearly very talented but he’s a smart racer as well. He knows when to take risks and when to consolidate.

“He’s been a fantastic ambassador for Ice Break, representing the true ‘Bring it On’ spirit that the brand represents. Moving to the Dunlop Series is the logical next step in his ambitions to get into the V8 Supercars Championship and it’s an exciting step for us as a brand.”

The opening round of the Dunlop Series will be held at the Clipsal 500 in Adelaide on February 28-March 3.