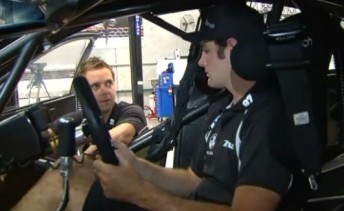 Shane van Gisbergen has confirmed that he will compete in the 2013 V8 Supercars Championship, driving for Tekno Autosports.

The New Zealand star, who made the shock announcement last year that he would quit the sport in favour of a quieter life in his home land, has reversed his decision and will continue in Australia’s premier motorsport category, driving for the Gold Coast-based Holden Commodore team.

Van Gisbergen will compete under the #97 – a number that he carried during his junior racing.

The news is to be made public in Australia during tonight’s Seven Network’s news bulletins, however, New Zealand’s 3 News station has published vision and comment of the story.

CLICK HERE for a link to the 3 News video.

In the interview at Tekno’s Yatala base in Queensland, van Gisbergen says that he wasn’t enjoying himself last year and he was looking for a change.

“I needed to get away, have a think about where I wanted to be and what I wanted to do in life.

“I had a good break over Christmas, and here I am. It’s pretty exciting about what’s going to happen and I’m glad to be here. (Tekno) have given me a great opportunity in great cars. It’s a great opportunity but I’m looking forward to getting into it and getting onto it.”

The news is likely to receive some criticism though, given the hype and publicity surrounding the ‘sabbatical’ that he claimed he was taking from the sport.

But while there may be criticism, it is good news for the sport as it retains one of its genuine racing talents.

Having driven for Stone Brothers Racing for six years, van Gisbergen finished with a best overall finish of fourth in 2011, which included two race wins (Hamilton and Hidden Valley).

Last year, he finished sixth overall in the championship having announced the week leading into the season finale that he would take a break from the sport. Much fanfare was created by his departure, with all the drivers signing his race bonnet prior to Sunday’s final race.

Since Sydney, he has competed in selected drift and rally events. He has already confirmed that he will compete in the New Zealand SuperTourers title, plus other selected motorsport activities.