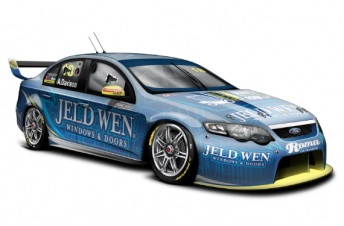 Charlie Schwerkolt Racing has become the first team to reveal its sponsor package and racing colours for the 2013 V8 Supercars Championship.

The #18 Falcon, to run as the fourth Ford Performance Racing entry for Alex Davison, has been revealed with backing from windows and doors provider Jeld-Wen.

The sponsorship arrangement between Schwerkolt and Jeld-Wen is a multi-year deal.

Jeld-Wen is no stranger to the sport, having been backed Stone Brothers Racing between 2006 and 2008.

Schwerkolt is excited about bringing a sponsor back into the game.

“To be able to bring a great supporter of V8 Supercars like Jeld-Wen back into the sport is really satisfying and to do it in conjunction with the launch of my own team is the icing on the cake,” Schwerkolt said.

“This is the ideal year to be making what feels like a comeback to the sport. With new rules, new cars and the link-up with Ford Performance Racing, it couldn’t be happening at a better time.

“Alex is a seasoned campaigner and with the support of Jeld-Wen and our other partners I am sure CS Racing can be battling at the front with the other FPR cars.”

Team Jeld-Wen and the other three FPR Falcons will test at Winton in the coming weeks, prior to the V8 Supercars season launch at Sydney Motorsport Park on February 16.

The revealing of Davison’s car is the first in what is expected to be a rush of announcements in the coming month, and Speedcafe.com understands that fans will only have to wait until this afternoon to be told that Shane van Gisbergen has been signed by Tekno Autosports.