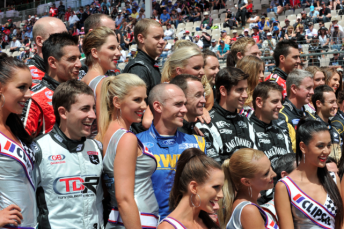 The final look of the 2013 V8 Supercars Championship grid is almost complete, with a number of impending confirmations set to lock down the new field.

The shock news regarding the fast Kiwi’s future is set to be confirmed later this week.

The role vacated by van Gisbergen at Erebus Motorsport (formally SBR) is yet to be confirmed, with paddock talk linking Chaz Mostert to the drive. The Ford Performance Racing junior driver is likely to remain a driver contracted to FPR, but could be loaned to the new Mercedez Benz team.

FPR team principal Tim Edwards has said in the past that if he is unable to find Mostert a seat in the V8 Supercars Championship, he will field a Dunlop Series entry for his young charger.

Another set of seats yet to be announced lie with the newly-expanded two-car Lucas Dumbrell Motorsport squad.

Dunlop Series runner-up Scott Pye has been heavily linked to the drive in the #30 iSelect-backed entry, while the team’s second Holden is firming as a new home for Dean Fiore.The West Australian recently confirmed that he will lease his own Racing Entitlements Contract to Dick Johnson Racing for this year.

Team owner Lucas Dumbrell could not be contacted for further comment.

The final vacancy is at Dick Johnson Racing, driving the #12 Falcon that was recently vacated by Fiore. Last year’s DJR driver Steve Owen and former Kelly Racing pilot Karl Reindler are understood to be in contention for the position.

Other seats that have not been made public, yet are widely known as confirmed, are Michael Caruso and James Moffat at Nissan Motorsport.

See below for the list of confirmed drivers in the 2013 V8 Supercars Championship.