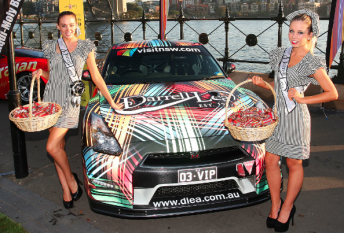 The Bathurst 12 Hour organisers have revealed the look of the Nissan GTR Safety Car for next month’s ‘once around the clock’ race.

The Nissan was unveiled at a media event in Sydney and features a multi-coloured livery for the resurgent Darrel Lea brand, purchased by the Quinn family late last year.

“It is exciting for us to be involved in such fantastic event like the Liqui-Moly Bathurst 12 hour,” said Darrell Lea commercial marketing manager Nicole Waters.

“To have our iconically Australian brand at the front of the field at the most iconic place in Australian motorsport works really well, and we’ll be showing people that the Darrell Lea brand is back better and stronger than ever.”

Last year there were nine Safety Car periods for a total of 22 laps – out of 270 completed by the winning Audi.
The Liqui-Moly Bathurst 12 Hour will he held on February 8-10.