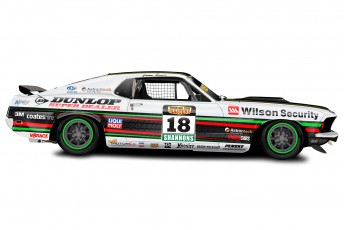 Having won the past two Touring Car Masters titles, Bowe will enter the new season with not only a new sponsor and revised livery, but with a new car preparation relationship with Maranello Motorsport and Synergy Race Engines.

Bowe has held a long-term association with the Dunlop brand during his 40 years in racing and says that he is pleased to extend on his deal with the tyre giant.

“My racing relationship (with Dunlop ) goes back nearly 40 years and this year marks 25 years of being a company and product ambassador for Dunlop,” the two-time Bathurst 1000 winner said.

“That a brand of the stature of Dunlop Super Dealers has chosen to sponsor my iconic Mustang ‘Sally’, indicates the strength of our relationship and the growing profile and public following of the Touring Car Masters series.

“Dunlop make the best tyres on the market, I have raced on them forever and helped develop the product for Ford Performance Vehicles so I speak with some authority.”

The opening round of the Touring Car Masters will be held at Sydney Motorsport Park, headlining the on-track action at the Top Gear Festival next month.