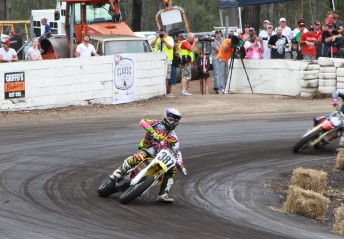 Known as ‘Rubberman’, Kirkness has spent time racing AMA Flat track Harley-Davidson’s on very similar circuits to the Old Bar oil-based racetrack and was the Rookie of the Year in the professional American series in 2009.

Bringing together one of the strongest fields of motorcycle racers ever seen in Australia, world champions, Grand Prix winners, FIM gold medallists and all round superstars enjoyed a spectacular day of racing despite inclement weather threatening the event early on.

After a one-lap World Superbikes-style shootout to determine the the field for the main race it was down to business, underlights at Australia’s sole remaining oil-based flat track for the final.

With Broc Parkes and local Josh Hook setting the fastest laps in the opening heats and practice, the start of the main race was was met by a massive roar from an extremely excited crowd but things were soon silenced after Bayliss fell heavily on the final corner of the opening lap, causing a red flag.

Bayliss was quick to return to his bike however, as the restart saw Kirkness produce the holeshot and from there, held off a determined Herefoss to win the $2500 prize winner cheque.

MotoGP star Randy dePuniet had troubles with his bike, but was eventually able to take his place in the field. However his time in the Superpole was not enough for the Frenchman to make it to the main event.

The crowd – estimated to be the biggest to attend an event in the Manning Valley town of Taree – were thrilled to see the likes of triple World Speedway Champion, Jason Crump, dePuniet and his Playboy model Australian wife, World Superbike competitor, Broc Parkes, Garry McCoy and Chris Vermeulen among others.

Traffic banked up to around 3km to try and get into Old Bar.

Heat races were taken out by Bayliss, Joshua Hook (2), Troy Herfoss (2) and Caslick.

It wasn’t just two wheeled experts on hand for the event with V8 Supercar racer, Michael Patrizi lending a hand to Bayliss throughout the event and WRC star, Chris Atkinson was an interested on-looker – even getting involved in mechanic duties as the night wore on.

Bayliss has vowed it will return in 2014.

CLICK HERE to see Speedcafe’s gallery from the event.