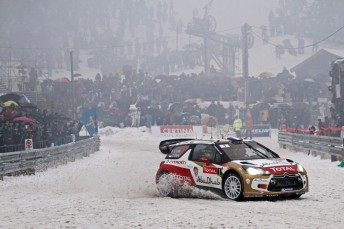 The snow and ice could not stop Sebastien Loab

Despite only committing to four outings in the 2013 World Rally Championship, defending nine-time WRC title holder Sebastien Loeb has taken an emphatic victory at the Rallye Monte-Carlo.

Since the second stage of the event the Citroen superstar was never headed winning ahead of Sebsatien Ogier on the debut of the Volkswagen Polo R, with the other DS3 of Dani Sordo in third.

The four day event was a tricky affair with freezing temperatures bringing plenty of snow and ice, plus on the final day – rain.

The final day had a sting in the tail with heavy snow on the 1606-metre summit of the famous Col de Turini and it took its toll with third-placed Ford Fiesta RS of Evgeny Novikov, Jari-Matti Latvala’s (fifth place) Volkswagen Polo R and eighth placed Juho Hanninen (Ford) all crashing on the first of the scheduled three runs over the Col.

Tyre selection was irrelevant as drivers emerged in a state of shock, describing conditions as the most difficult they had experienced.

“It was undriveable,” said Loeb.

“The roads were snow and water and we were aquaplaning all the time. We had no grip. We drove at 30kph on the straights because if you go quicker you lose the car completely and you go off.”

The second run over the French Alps was won by Loeb, this time in darkness. With crews set to face one more run, organisers cancelled the final two late night stages of the event after spectator numbers swelled on the Col de Turini and gridlock even blocked the roads which safety crews would have needed to access the stages.

Highlights from the morning stages