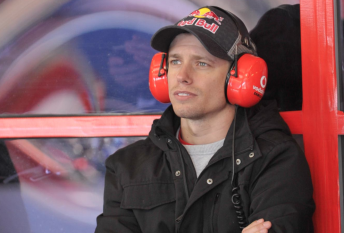 One of the most anticipated announcements in V8 Supercars history looks to have been gazumped by an article in The Sunday Mail newspaper in Adelaide today.

It is believed that a story that has been prepared in advance for the official program of the Clipsal 500 in Adelaide next month has been re-worked into a news story – claiming that Casey Stoner’s move from MotoGP to V8 Supercars is “official”.

Stoner was quick to close down the premature announcement, tweeting a denial a few hours after the story surfaced.

He wrote: “Don’t believe everything you read! Haven’t decided what I’m doing yet, of course V8 Supercars is on the cards. Will let you know when I do!”

Given long editorial lead times for such events, most stories for official event programs are prepared and kept under embargo until they hit the newsstands a few weeks before the actual event.

The nature of the event program business always means there is always some ‘risk’ and that many stories are prepared in a manner to ensure they are not dated.

It is believed that is how the Stoner story was prepared, but on being discovered by another journalist, it was turned into a news story.

There has been plenty of speculation about Stoner joining V8 Supercars’ Dunlop Series with Triple Eight Race Engineering and his long-time sponsors, Red Bull, for sometime, but there has been nothing made public or confirmed by any of the stakeholders.

The story also claims that Stoner, who quit MotoGP at the end of the 2012 season after a career that netted two world championships, will race with his traditional number #27.

If Stoner is to race under the #27, it would have required Triple Eight to obtain the Level 3 contract from long-time holder Matthew White Motorsport.

The seven-round Dunlop Series kicks off at the Clipsal 500 Adelaide in late February before taking in Barbagallo, Townsville, Queensland Raceway, Winton, Bathurst and Homebush.

While it is almost certain that Stoner will be a part of the Triple Eight Race Engineering outfit in 2013, the role, and with what sponsors is not expected to be made ‘official’ for another week.