Sebastien Loeb on the verge of another Monte title

Sebastien Loeb on the verge of another Monte title 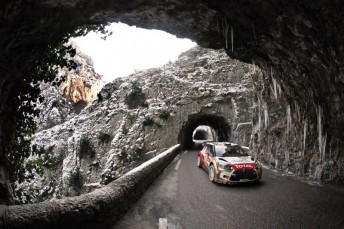 Citroen star Sebastien Loeb has extended his lead on the third leg of Rallye-Monte Carlo and is on course to win his seventh title on the famous event.

The defending nine-time world champion is now 107 seconds ahead of Volkswagen’s Sebastien Ogier.

Although the third leg contained just three stages over the French Alps, it did include one of the event’s classic stages – Sisteron which was back in the event for the first time since 2002.

Climbing as high as 1308-metres above sea level, the stage was dry on the lower sections before snow and ice at the summit of the Col de Fontbelle.

Loeb used a combination of winter and asphalt tyres on his DS3.

“It was the right decision for sure, but the mix is certainly not the most exciting to drive,” said Loeb.

“But we have to do it because I think it’s the best option. Overall I’m very happy with the job we have done today.”

VW’s quest for a podium on debut remains on track with Ogier despite a spin.

“It was okay, I was very careful especially on the ice. I took absolutely no risks,” said Ogier.

Russian Ford driver Evgeny Novikov has been on a charge after a slow start and he is now sitting in third place just 1.7-seconds ahead of Dani Sordo in a Citroen.

“On this stage I had two studded and two winter tyres. So I made up some time in the ice but we lost a bit at the beginning and the end where it was dry. I’m happy though.”

Novikov has been going forward, Mikko Hirvonen (Citroen) has been heading backwards. Third at the end of the opening leg, he is now in sixth behind former team-mate Jari-Matti Latvala who is coming to grips with the Polo R, especially on Sisteron.

“Let’s have more like this – a few more Sisterons please!” said Latvala.

“Now I’m starting to get my confidence. Much better!”

Most event in the WRC wind down on the final day, not Rallye-Monte Carlo which has five stages totalling 108.52 competitive kilometres, including three runs over the legendary Col de Turini, with the final two stages run in the dark of night.