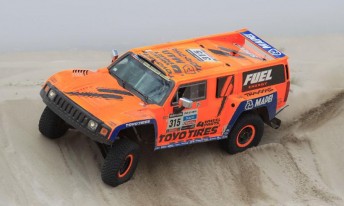 US racer Robby Gordon has won the penultimate stage of the 2013 Dakar, the 441km test from Copiapó to La Serena in Chile.

If not for getting stuck on stage one and rolling three days later, Robby Gordon could very well be fighting for the overall victory. Today he claimed his second win of this year’s event and ninth of his career. He was 22 second faster than Frenchman Guerlain Chicherit, with Giniel de Villiers in third.

“I think starting from the back has some advantages, but for us the most important thing is we just want to continue and finish the rally,” said Gordon.

“Any time you don’t win you’re going to have some regrets and I guess the first regret was being too conservative on day one, because that got me stuck and from there we never recovered – we just put ourselves in worse positions.”

This was not enough to worry Stefan Peterhansel, who is all but guaranteed victory nearly 45-minutes ahead of De Villiers.

After climbing into the top-10 overall, Australia’s Geoff Olholm slipped to 11th, but still within sight of completing the event in 10th. Adrian Di Lallo is 37th.

On two wheels “Chaleco” Lopez won the stage in his own country and also moved to second place overall behind Cyril Despres.

Taking advantage of being the seventh rider to start, Lopez went all out to the stage by five and half minutes from Despres.

“Today was a very good day; tomorrow the next special will be technical in La Serena,” said Lopez.

“But I think I always go to Santiago in a very happy mood. Imagine being capable of winning in my country, that’s motivation for the finish. All the people here, it’s great. If it’s not possible to get on top of the podium, I’m already very happy as it stands.”

Rod Faggotter remains the best of the Australians in 14th place overall, just one place ahead of Ben Grabham.

In the quad category Sarel Van Biljon won the stage, but Marcos Patronelli remains in control out front.

In the trucks Andrey Karginov won the stage in his Kamaz and is second overall to his team-mate Eduard Nikolaev, Ayrat Mardeev (Kamaz) is third.

Tomorrow is the final day of the Dakar with crews to face a 128km stage from La Serena to Santiago.