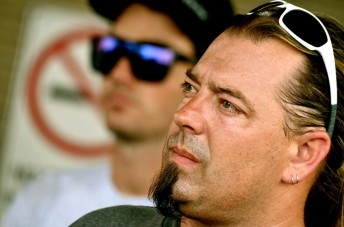 STP World of Outlaws star, Jason Sides nabbed the preliminary night win of the two night ENZED World Series Sprintcars sojourn to Sydney Speedway, edging out Jason Johnson by a mere two-tenths of a second at the drop of the chequered flag.

Johnson led from the green light in the opening night stoush, only to have the pony-tailed Sides drift past him coming out of the final turn.

The first Australian home was fittingly Brooke Tatnell in his first visit to the Granville clayway where he cut his Sprintcar teeth in a number of years.

He edged out local Roddy Bellbowen, who had one of his career best performances, after the Sydney sun had baked Sydney Speedway in the hottest day since 1939 in Sydney.