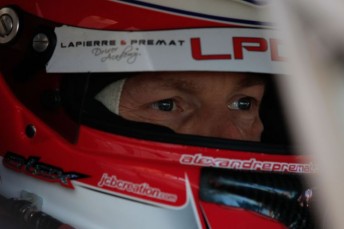 Frenchman Alexandre Premat will remain with Garry Rogers Motorsport for a second V8 Supercars Championship season, the team has confirmed.

Although Premat was said to have signed a three-year contract with the team prior to his rookie 2012 campaign, a series of poor performances saw the now 30-year-old benched for October’s Armor All Gold Coast 600 – throwing his future into serious doubt.

Team owner Garry Rogers, however, has pledged his commitment to Premat, affirming that the international will partner the squad’s new signing Scott McLaughlin for the 2013 season.

“Alex was a gamble last year and we struggled,” said Rogers.

“There was no doubt that he has the skills, but we didn’t get the best out of him.

“I was disappointed, based on his history we believed he could do better. From Abu Dhabi (the event following the Gold Coast) on he started to hit his straps.

“I was deciding what do with the driver line up (and) his qualifying and racing performance in Sydney (Homebush) was as good as many who have been driving the cars for a number of years.

“It was disappointing that he had the issue with the cool suit and wasn’t able to conclude what could have been a successful closure to 2012.

“I decided I had invested a lot in him and he has invested in us, moving his family over to Australia, we can get more out of him and more results like Sydney.”

Despite his speed at Homebush, Premat finished 27th in last year’s championship having failed to see the chequered flag higher than 13th all season.

The former factory Audi sportscar and DTM driver is hopeful that the introduction of the Car of the Future into the V8 Supercars Champion will help him gain ground on the category’s established stars.

”I have set my expectations to finish in the top 10,” said Premat.

”Everyone will be learning from zero and we will be doing the same. I want to start the year as I finished in 2012 and I’m looking forward to the new season.”

GRM has already completed both of its Accredited Manufacturer test days with its first COTF chassis, and is expected to give its almost complete second car a maiden outing at Winton in the week leading up to February 16’s compulsory hit-out at Sydney Olympic Park.

The Winton test, scheduled for February 12, should see the team’s cars run with the yet-to-be-released VF model Holden Commodore bodywork for the first time.

The team has retained both of its 2012 endurance co-drivers, Jack Perkins and Greg Ritter, for this year’s Sandown and Bathurst events.