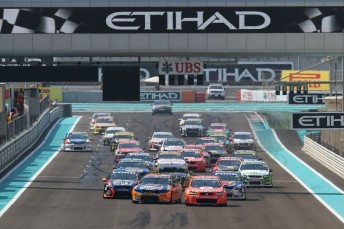 The 2013 V8 Supercars Championship has been officially reduced to 14 events with confirmation that the category will not be on the Abu Dhabi Formula 1 Grand Prix support schedule this year.

As previously reported by Speedcafe.com, a move by Formula One Management to bring its GP2 and GP3 classes to the Yas Marina Circuit has seen V8 Supercars shunted from the event program.

A statement from V8 Supercars confirming the news emphasised the role of the FOM in the process, and underlined a desire to return to the Middle Eastern venue on an alternative date in 2014.

“It has always been clear that FOM ultimately decides, or approves, ‘support’ categories that run in conjunction with Formula One,” said V8 Supercars CEO David Malone.

“We were acutely aware of this when we announced the 2013 calendar, with FOM then making this decision in late December. We thoroughly enjoy competing alongside Formula One and are absolutely comfortable with this news.

“There are contingencies in place and we will discuss the options, which may include racing on an alternate date to Formula One in 2014, with Yas Marina Circuit as soon as possible.

“What is very clear is the outstanding relationship we have with Richard Cregan and his team at Abu Dhabi Motorsport Management; and a committed combined will to find an alternative solution that fits for all.

“V8 Supercars and ADMM will announce any new arrangements as soon as they are decided.”

V8 Supercars will not replace the planned November 1-3 Abu Dhabi event, which will now give its teams a three-weekend break between the Armor All Gold Coast 600 and Phillip Island 400.