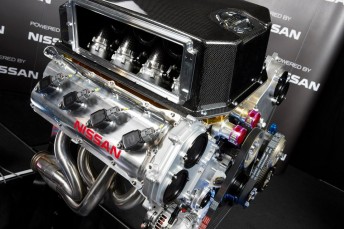 Nissan Motorsport continues to chase a competitive power output from its quad-cam V8 Supercar engine, and may need to request a short-term parity concession in order to be on the pace at Adelaide’s season opener.

The team has been bench testing its 5.0 litre version of Nismo’s VK56DE race motor since mid-September, but is now running out of time to match the approximated 640bhp target figure ahead of the first round.

Team co-owner and driver Todd Kelly is confident that the gap can be bridged through further development of the already homologated package, but admits that finding the required performance before Adelaide will be difficult.

“I’m hoping it (power) won’t be an issue because we’ve got a few different things with inlet manifolds, camshafts and cylinder heads still to try, but the biggest problem is time,” he told Speedcafe.com.

“The engine, on a calculator, should make the same power as our Holden did but we’re quite a way off that at the moment, and the only way we’ll fix that is with time and testing.

“It might be that we end up having two or three homologation specs through the early part of the year to get to where we should be.”

Kelly added that the team will not hesitate to ask for a concession in order to be on the pace in the short-term, with a marginal increase in engine revs the team’s most favoured outcome.

“Hopefully they (V8 Supercars) will be open to a suggestion like that (increasing the 7,500rpm rev limit) to get us to as close to a level playing field as we can for the first round,” he said.

“After changing manufacturers in the time frame we have we shouldn’t have to go to the first round with any disadvantage whatsoever.”

Erebus Motorsport is also still developing its Mercedes-Benz AMG M159 engine package, which unlike the VK56DE, is yet to go through the V8 Supercars homolgation process.

Erebus team manager Dave Stuart told Speedcafe.com earlier this week that the team is happy with how its development is progressing, but that it is too early in the project to say whether any extra help will be required to be on target for the first event.

All four of the team’s drivers – Rick Kelly, Todd Kelly, Michael Caruso and James Moffat – are understood to have cut laps during the Sydney test, although Todd’s track activity was extremely limited due to his ongoing recovery from shoulder surgery.

Kelly confirmed that the team will test at Winton at least once more before the compulsory pre-season running in Sydney on February 16, with further refinement of the car’s cooling system among the key items on the agenda.

Although no longer bound by the one-car per day ACM rules, the squad’s parts production process means the remaining three race cars will not come together until much closer to the all-in hit-out, leaving it to continue with a single car.