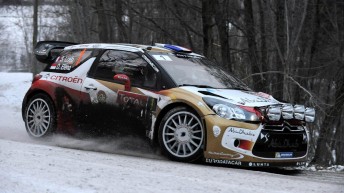 Sebastien Loeb stretched his lead in the tricky conditions

Nine-time World Rally Champion Sebastien Loeb has extended his lead on a cold and snowy second day of the Rallye Monte-Carlo.

After dominating the opening day, the Citroen driver took another 14 seconds from Sebastien Ogier who continued to impress on the debut of the Volkswagen Polo R WRC.

Competitors tackled two identical loops of three stages in the northern Ardeche and Haute Loire regions north-west of Valence. The 132.50km of asphalt was covered by deep snow and hard-packed ice, although conditions became rutted during the second pass. Temperatures were -11°C throughout the morning.

“We kept the lead that we had this morning and that was the main goal for the day. The penultimate stage in St Bonnet was full of snow and offered really nice conditions. But this last test was a bit rough, with a lot of cuts and just one line through the ice,” said an unflustered Loeb.

With Loeb only running a limited programme in 2013, Ogier is under strict instructions to maintain his second place and not get caught-up in an all-out battle for the victory.

“I don’t care about him. You need to get that into your minds!” said Ogier.

“There are still two days to go but we’re happy with the car. We’ve had no problems at all so we’ll cross our fingers and try to preserve second.”

The big battle is now for third with Mikko Hirvonen (Citroen) displaced by both Dani Sordo in a DS3 and the Ford Fiesta of Evgeny Novikov.

“It’s a good battle and the stages continue to be difficult tomorrow, but I’m really looking forward to Sisteron (SS13),” said Sordo.

Novikov took full advantage of a brand new set of studded tyres to win the final two stages of the morning in his Fiesta RS for the Qatar M-Sport squad. The Russian promised to continue to attack tomorrow.

“I’m so happy and I’m looking forward to the last two days. I will continue to fight for a good place,” he said.

Video wrap from the morning stages

Video wrap from the afternoon stages