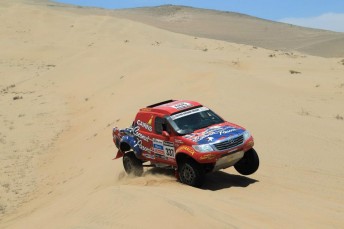 Geoff Olholm is now 10th outright at the Dakar

Australia’s Geoff Olholm has cracked the top-10 overall on the 319km 12th stage in this year’s Dakar from Fiambalá in Argentina to Copiapó in Chile.

Olholm finished the stage in 17th, but it was good enough to see the Coconut Car Race Team Toyota HiLux hit 10th overall for the first time in this year’s event.

This all came despite a difficult day of competition.

“Fellow competitor Eric Vigeroux was stuck in a dune bowl holding up a tow rope, so we gave him a tug, then get stuck ourselves,” said Olholm.

“We then lost focus a bit and got stuck a couple more times then got a puncture.

“10th spot is up for grabs and there are a few guys behind us who drive hard, and will be fighting for it.

“The next two days have to be mistake-free for us.”

As good as it has been for Olholm, it was the complete opposite for Bruce Garland who retired his Isuzu D-Max with mechanical issues.

“Sorry, we are all beyond exhaustion,” said Garland.

“No food or sleep for days. We have officially withdrawn – gutted.

“So sorry we could not get her to the finish. We picked up a bad batch of diesel in Cordoba and the trouble started then.”

Up front Nani Roma took advantage of successive mistakes made by Robby Gordon, then by Stéphane Peterhansel, to grab his third stage victory this year, 4:18 ahead of the American. Now officially focused on protecting his lead in the general standings, Peterhansel drove without forcing the issue. Giniel de Villiers remains second overall with Roma third.

On two wheels Frans Verhoeven picked up his fourth stage victory on the Dakar and his first since 2011. In the general standings, Cyril Despres and Ruben Faria are solidly installed in the first two places ahead of “Chaleco” Lopez.

Australian Rod Faggotter is now 14th overall, just one place ahead of Ben Grabham. Todd Smith was the best-placed Aussie on the stage in 21st and he is 31st overall. Matt Fish was 22nd on the stage and is 112th overall, while Warren Strange is 25th and Simon Pavey in 57th.

In the quad category, the return to the dunes and off-track riding brought Sebastien Husseini back to his favourite terrain. As a result, the Dutchman, who lives in the United Arab Emirates, finally won his first stage victory on the Dakar, head of Marcos Patronelli. However, the Argentinean still boasts a more than comfortable lead in the general standings, just under two hours ahead of Chilean Ignacio Casale.

Winner of yesterday’s stage, Australia’s Paul Smith, was ninth on the stage after a puncture and sits seventh overall.

In the trucks the Kamaz team continued its charge. Andrey Karginov won the stage ahead of his team-mate Ayrat Mardeev. Eduard Nikolaev (Kamaz) has 31 minutes lead over Mardeev with another 20 minutes back to Karginov.

Tomorrow is the penultimate day in the Dakar, but a sting in the tail is the 441km stage from Copiapó to La Serena.