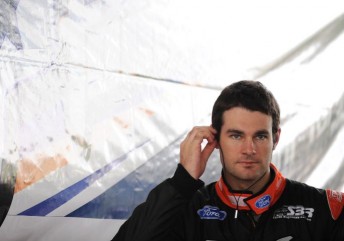 The 23-year-old will drive the Ford Falcon raced last year by Colin Corkery, who is believed to be undergoing an operation which will put him out for the season.

It is understood that van Gisbergen will team with Corkery’s 2012 co-driver, the decorated Dutch racer Jeroen Bleekemolen, for the endurance races.

Van Gisbergen was candid in an interview with TV3, opening up on a frustrating 2012 V8 Supercars campaign that was run in the shadow of an impending takeover of SBR by Erebus Motorsport.

“We weren’t happy last year. We had won races the year before and we didn’t even really come close last year and all the changes that were happening for this year just wasn’t something to look forward to,” van Gisbergen told 3 News’ Shaun Summerfield.

“It’s been worse because people have put the word retirement out there. I never said retirement. That means final. I just said I was leaving for a bit. That could be a week, a year who cares?”

“It’s a pretty exciting series the SuperTourers. I watched every race last year.”

V8 SuperTourers had been highly active in chasing Van Gisbergen since Speedcafe.com broke the news in November that the Kiwi was about to turn his back on the Aussie series.

The V8ST Championship does not, however, clash with any V8 Supercar dates, leaving the door open for van Gisbergen to explore a return to Australia and do both series if he chooses.

As reported in an earlier story, Van Gisbergen is being linked to a return to V8 Supercars this year with the Gold Coast-based Tekno Autosports Commodore team.

Tekno currently has a full-time seat vacant alongside its owner/driver Jonathon Webb and is also yet to confirm a sponsorship package for the new season.