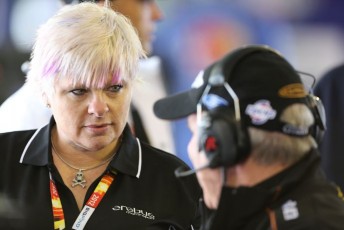 The shakedown running of Erebus Motorsport’s first Mercedes-Benz V8 Supercar on Wednesday has marked the beginning of a busy month of on-track action for the team.

The maiden laps at Queensland Raceway provided a clear sign that the team has made strong headway into the daunting task of designing, building, testing and homologating the AMG E63 engines and bodywork over the four months since the deal with AMG Custom Sports was confirmed.

CLICK HERE for more on the inaugural Mercedes hit-out

The team’s progress has been such that it remains on target to complete a raft of aerodynamic test running, its two Accredited Manufacturer test days and shakedowns for its two remaining race cars before the compulsory February 16 test day at Sydney Motorsport Park.

The second and third chassis are currently in the process of having their bodywork fitted in the team’s Queensland workshop, while a fourth, which enjoyed a brief track outing as a Ford Falcon last October, will be readied as a spare once the three race cars are complete.

“Obviously everyone is really busy and there’s lots still to do, but we’re on target for the production schedule that we finalised late last year.” Despite the extensive test plans, it is expected that the look of the race cars will be kept under wraps until a team launch on the eve of the Sydney test.

Like the aerodynamic package, the M159 AMG engine is also yet to go through its homologation process with V8 Supercars – something that Nissan’s VK56DE powerplant has already completed.

AMG’s racing experience with the engine from its GT3 SLS has seen the German Customer Sports factory working hand-in-hand with Erebus’ own engine department during the bespoke, 5.0 litre, V8 Supercar version’s development.

The V8 Supercars homologation process should see a specification locked in whereby the AMG unit produces the approximate 640bhp of the existing pushrod Ford and Holden engines.

“We’re comfortable with the amount of progress we’ve made with the engine so far, but until V8 Supercars go through their data gathering process and we run our engine on their dyno we’re not going to know exactly where we’re at,” added Stuart of the engine development.

Tim Slade and Lee Holdsworth will lead Erebus’ assault on the 2013 V8 Supercars Championship, while a long list of names, including that of Chaz Mostert, have been linked to the seat vacated by Shane van Gisbergen at the end of last year.