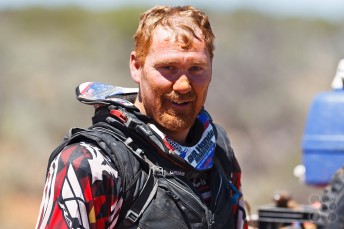 For the first time since 2006 an Australian has won a stage on the Dakar Rally, with quad racer Paul Smith setting the fastest time in the category on today’s 11th stage from La Rioja to Fiambalá in Argentina.

On a day where the weather once again forced officials to all-but cancel the car and truck category, the quads and bikes completed the tricky stage.

34-year-old Smith is the first Aussie to win a stage since the late Andy Caldecott, who won the third stage of the 2006 Dakar in Africa before tragically losing his life on the same event days later.

The wet weather compacted the sandy surface and Smith took advantage of the conditions to win the stage by a healthy four minutes from Gaston Gonzalez and overall leader Marcos Patronelli.

“I’ve been a Dakar tragic for years, ever since guys like Andy Caldecott were racing,” Smith told SPEEDTV.com.au

“It might sound cocky, but yeah, I thought a stage win could be possible. I’ve been racing for years in Australia and won plenty of events there.”

For the cars a simultaneous flash flood in two rivers forced the race directors to halt the stage. Subject to the race officials’ decision, Robby Gordon, who was in front at the time of stoppage, should be awarded the stage victory, making it his eighth on the Dakar. Stéphane Peterhansel still retains command of the general standings with a lead of just under 52 minutes over South African Giniel de Villiers.

The bikes completed the test with American Kurt Caselli winning his second stage of this year’s event. Cyril Despres further increased his lead over Ruben Faria by over 13 minutes.

Ben Grabham was the fastest of the Aussies on the stage to be 17th overall just two places behind Rod Faggotter who fell during the stage.

“I came off a sand dune, hurt my left shoulder, hit my head and popped my camel back,” said Faggotter.

Just three stages remain in the Dakar with crews to face a 319 timed stage from Fiambalá to Copiapó tomorrow.