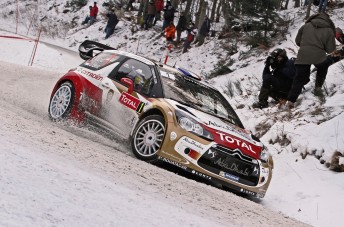 Sebastien Loeb might be a semi-retired World Rally Championship driver, but he showed the class that has seen win the past nine straight titles on the opening day of Rallye Monte-Carlo.

Over two stages, which were repeated, the Citroen superstar completed the opening leg with an 80-second lead over the all-new Volkswagen Polo WRC of Sebastien Ogier. This came after the VW driver opened his team’s account with victory on the very first stage of their WRC campaign.

Loeb’s performances coming despite the ever-changeable conditions in the freezing weather of southern France.

“There was less snow than this morning. But near the end, while the road looked dry, it’s freezing again and I lost and grip and some confidence. I had a few small moments….I’m happy to be at the end of the day,” said Loeb.

An up and down day for Citroen leader Mikko Hirvonen who was as low as sixth before jumping to third by the end of the day.

Dani Sordo (Citroen) lies fourth with the second VW of Jari-Matti Latvala in fifth after the Finn picked up a front right puncture five kilometres from the finish of the final stage of the day.

The best of the M-Sport Fords is Russian Evgeny Novikov in sixth. However, it was a far tougher day Thierry Neuville, Mads Ostberg and Juho Hanninen. Neuville is out of the event after clipping a rock and breaking the front-left suspension on his Fiesta. No re-entry rule exists on the Monte, so the Belgian is on his way home.

If the difficult stages weren’t tough enough for Ostberg, his car stopped on the liaison section after the final stage with an electrical sensor problem. Team engineers provided advice on the telephone as Ostberg worked to solve the problem but he eventually checked in 11 minutes late, and is likely to receive a 1:50 time penalty.

Hanninen spun near the end of the final stage and lost plenty of time finding an area on the narrow road to turn around.

Crews were left frustrated during the day with issues with the live timing. Inside the cars no one had split timing, while service crews had no idea the positions in the event. At one stage the system showed that Loeb had stopped on one of the stage, but he had no issues.

Here are the highlights of the opening Leg