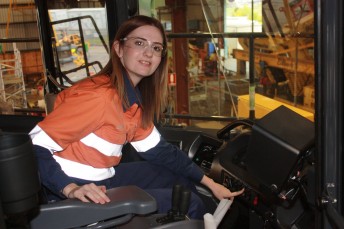 Jodanna Pullen will take the next step in her drag racing career next month after purchasing a Holden Monaro to enter the Super Stock category.

Mackay-based Pullen – who works for mining and earthmoving giant, Komatsu – has been racing since she was eight and recently has spent time in the Super Street category. She will test the car at Willowbank Raceway in February and then assess the opportunity to break out onto the national scene at the Perth Motorplex’s Westernationals on the first weekend of March.

If the FemRPM team does make its Super Stock debut in Perth with Jodanna at the wheel, the diminutive 31-year-old will be the only female racer in the Aeroflow Sportsman Series Super Stock category.

The machine the team has acquired to take the step forward is no slouch – it has been racing in the ANDRA Drag Racing Series Pro Stock category at the hands of heavy hitter Denis Whiting. Until recently, it held the ANDRA Pro Stock National Speed Record.

Jodanna hopes the performances and development that Whiting put into the car will assist her to quickly rise through the Super Stock ranks.

“After starting out as just a kid in the Junior Dragster and moving into Modified and Super Sedan, I am so excited to now have the opportunity to step up into Super Stock,” said Pullen.

“I have been absolutely itching to get in the seat and put down some passes ever since I purchased the car. If all goes to plan with testing and I feel comfortable in the car, we will be making our race debut in Super Stock with the new car at the Westernationals.