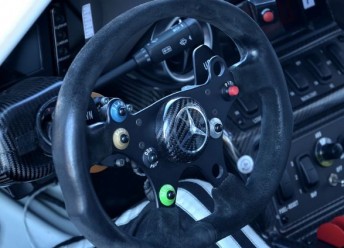 The three-pointed star, seen here in an SLS GT3 car, will be on the V8 Supercars grid this season

Speedcafe.com understands that Tim Slade completed all of the car’s permissible 20 shakedown laps, which were performed under the watchful eye of V8 Supercars officials.

The shakedown came less than four months after the team’s deal to compete in AMG E63 guise was finalised.

Today’s running was undertaken at a closed Queensland Raceway as the team seeks to hide the look of the car until the new E63’s Australian launch.

When contacted by Speedcafe.com for comment, the team distributed a brief statement from its CEO Ryan Maddison.

“While the car is still in early stages of development we are very happy with the results and look forward to continuing to develop all three of our cars over the coming weeks, to achieve our homologation requirements,” he said.

“My dream on wheels did exactly what it was meant to. Nothing went wrong, nothing fell out, or dripped, or spluttered, it all went according to plan,” she wrote.

“(It’s) a big achievement for both the boys in Germany and here in Queensland. The boys here gave it there all, I am so proud of them.”

The Mercedes V8 Supercar runs a bespoke, 5.0 litre, version of AMG’s 159 V8 engine that has been co-developed by AMG Customer Sports in Germany and the formerly Stone Brothers Racing engine shop in Queensland.

The team had completed a shakedown with its first Car of the Future chassis in Ford Falcon FG form last October. That car, converted into an E63, will serve as the team’s spare chassis when the season gets underway in Adelaide on March 1.

Erebus will field three cars in the championship, with Dunlop Series front-runner Chaz Mostert currently the favourite to land the seat alongside Slade and Lee Holdsworth that was left vacant by Shane van Gisbergen’s shock departure.