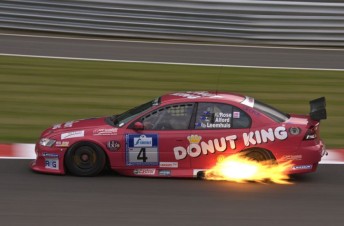 Part-time Dunlop Series driver Adam Wallis and Kumho Series regular Aaron Tebb will join Rose in the car, which will tackle the race for the first time this year under revised Invitational class rules.

The Holden was originally built by Garry Rogers Motorsport in 2001 and purchased by Rose six-years later.

It has since been campaigned in a variety of endurance races at venues such as the Nurburgring, Spa Francorchamps, Sepang and Dubai.

The car no longer remains in complete V8 Supercar specifications however, with an 18-inch wheel and tyre package and a sequential gearbox among the upgrades.

“The keys to success in endurance races are good preparation in the workshop and sensible driving during the race,” said Rose ahead of the February 10 race.

“Aaron is still young and relatively inexperienced, but he has already shown a lot of potential in the Kumho Tyres V8 Touring Car Series.

“I sent him to the Bathurst Motor Festival last year to race learn the circuit in one of my Mirage Cup cars, and he did a solid job.

“Adam raced in the Dunlop Series races during last year’s Bathurst 1000, so he is also familiar with the track.”

Incidentally, Wallis and Tebb both campaign ex-GRM Commodores in their respective series.