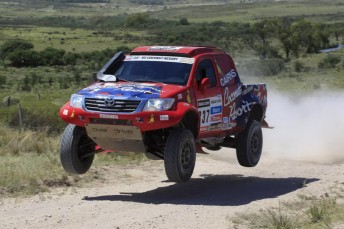 Geoff Olholm is knocking on the door of the top-10

The Coconut Car Racing Team Toyota HiLux finished the stage in 12th position, this all despite a flat tyre.

“I am rapt to be in 11th and the car is still going strong,” said Olholm.

“It was a fast gravel and rocky stage through the mountains of Argentina.

“We started eighth on the road and this allowed a three minute gap to Leonid Novistkiy Novitsky so we didn’t have any dust issues.

“Had a clean run to midway point passing Carlos Sousa who was stopped beside the road. Then got a front flat tyre which allowed two cars to pass.

“The famous Fiambalá stage is tomorrow so huge soft dunes. Many changes in the placings can occur, so hopefully we can have another great day.”

Up front Stéphane Peterhansel is in complete control. With his main rival Nasser Al Attiyah now out of the event, the Frenchman is doing only what he needs to keep his advantage in the general classification.

The stage was won by Argentina’s Orlando Terranova who used his local knowledge to full extent to win his first ever stage of the event. With four days until the finish in Santiago, Peterhansel has a 52 minute lead over South African Giniel De Villiers.

On two wheels Joan Barreda picked up his fourth stage victory of the event, but the big winner was defending champion Cyril Despres, who despite issues throughout the event, re-took the lead from team-mate Ruben Faria. While Chaleco Lopez remains in contacted in third place.

In the quad category, Lukasz Laskawiec grabbed a second stage victory ahead of Ignacio Casale and Rafal Sonik. Marcos Patronelli started to defend his lead in the general standings with the sixth best time.

In the trucks Kamaz driver Andrey Karginov won his third stage of his career on the Dakar. Team-mate Eduard Nikolaev has a 43 minute lead over Czech driver Martin Kolomy in a Tatra, Ayrat Mardeev is third.