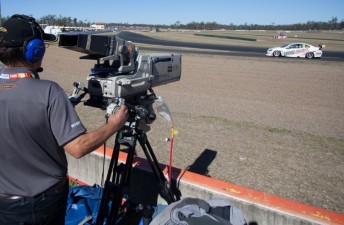 V8TV will continue to produce the coverage for Seven

V8 Supercars has formally confirmed its extended television deal with Network Seven, ending the long and drawn out saga over the category’s free-to-air broadcast rights.

The new agreement extends the relationship between the two parties for a further two years, and is understood to have come at a rate marginally below the $28 million per year of the previous six-year contract.

The telecasts will continue to be produced by the category’s own V8TV concern.

The deal guarantees live free-to-air coverage of each championship race into all of Australia’s metropolitan markets.

The terms of the new agreement were locked down last night, little over six weeks prior to the start of the new season.

The two-year deal should now put V8 Supercars’ television rights off-sequence with that of the major sporting codes such as the Australian Football League and National Rugby League, which both signed record deals with free-to-air networks last year, weakening the market for the category.

“This is an excellent outcome for the sport and fans,’” said V8 Supercars CEO David Malone of the new deal.

“The extension gives great continuity heading into a very exciting 2013 season. Seven has been a great partner and we look forward to their ongoing commitment to the highest level of coverage and promotion.”

Seven’s CEO of television, Tim Worner, added emphasis as to the importance to the network of the championship’s crown jewel race at Bathurst.

“Seven is looking forward to continuing to work with V8 Supercars to build on the sport’s success across our media platforms,” he said.

“We have a deep connection with the sport – in particular the Supercheap Auto Bathurst 1000 which Seven first broadcast in 1963.”

It is expected, but not yet confirmed, that only the championship’s marquee events will be broadcast on Seven’s primary channel, with the remainder to be seen on 7mate.

Confirmation of the category’s new subscription television package with Fox Sports’ Speed channel is expected to come at a later date.