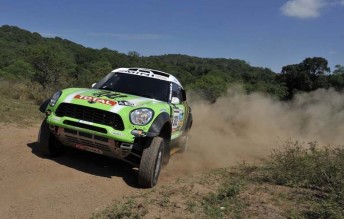 Peterhansel holds a commanding lead after stage 9 of the Dakar

With crews fully refreshed after yesterday’s rest day, competitors headed out onto the 592-kilometre run from Tucuman to Cordoba in Argentina.

After losing around seven minutes to Peterhansel during the opening half of the stage, Al-Attiyah’s Qatar Red Bull buggy lost over two hours in the overall standings due to a suspected engine issue.

Peterhansel’s three minute lead over Al-Attiyah has subsequently increased dramatically to a 49 minute lead over the now second placed Giniel de Villiers, who was fifth fastest today in his Imperial Toyota Hilux.

“It’s tough to stay focused for so long, the special stage was over 5 h 40 long!” Peterhansel said.

“Towards the end you start to get tired and you’re less lucid, for example on trails with lots of stones. We had to stay focused and avoid making mistakes, it’s very easy to have a puncture or break a wheel.

“It’s getting closer [to the finish], but there are still a few long stages left which favour the buggies. We need to take time whenever we can, because we can always make mistakes in Fiambalá or on the dunes of Copiapó.”

Roma, who began the day seventh overall, is now fourth following his second fastest stage time of the 2013 Dakar.

Australian Geoff Olholm has produced a impressive drive to finish the stage eighth overall. Olholm and co-driver Jonathan Auston have done themselves a massive favour in their quest to secure a top-10 berth in the overall standings for Autos. The pair currently sit 12th.

Fellow Aussie Adrian Di Lallo travelled well in the stage and has jumped up to 42nd in the overall standings. It was not so fortunate for fellow Isuzu Motosports teammate Bruce Garland who is still battling to complete the lengthy ninth stage, after a blown turbo early on sees Garland still out there attempting to fix the issue and complete the test.

In the two-wheel category the defending champion Cyril Despres finally picked-up his first win in the 2013 Dakar, which also marked his 31st career win, by 4′03″ over his closest rival, Joan Barreda.

After starting the longest stage of the rally in 11th place the Frenchman went on the attack from the start, followed by a conservative approach in the middle sector of the stage to preserve his tyres, but then stepped it up again in the final parts to secure his first stage win of the 35th edition Dakar.

Despres now moves to second overall in the Bike category with Ruben Faria taking the lead after overnight leader David Casteu endured a horror day of mechanical gremlins before injuring his right should after crashing into a cow, midway through the test.

“It was a good day with lots of attacking and lots of turns,” commented Depres.

“I’ve got blisters on my feet and my hands are sore, but I had to bang my fist on the table to say: “Hey, I’m here!”. Ruben and I are racing well for the team, he’s in good shape and that’s the most important thing right now.”

Marcos Patronelli continues to increase his buffer at the top of the quad classification, which has grown to 1 h 32’28” after today’s ninth special stage.

Ignacio Casale lies second with Rafal Sonik is sitting pretty in third, albeit some 2 h 08’44” down on Patronelli. Today’s winner of the Quad category was Lukasz Laskawiec who lies fifth in the overall classification.

Aussie Paul Smith had a trouble free run, moving one place up the general classification for Quads into 12th overall.

Tomorrow’s 10th stage takes crews across 353km of winding Argentine tracks from Cordoba to La Rioja through a succession of landscapes from wooded areas to barren plateaux.