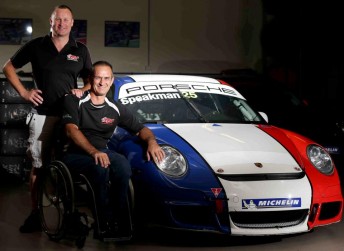 Paraplegic racer Matt Speakman is already eyeing a ride in Porsche’s flagship Carrera Cup series for 2014 as he prepares to make his debut in the Porsche GT3 Cup Challenge this year.

The now 45-year-old was paralysed in a motorcycle road accident 19 years ago, forcing him to abandon a deal to race in the 1993 Australian 600 Super Sport Championship.

Speakman will drive a McElrea Racing run entry fitted with a hand control system that the team has developed for the GT3 Cup Car.

“My entry into the 2013 GT3 Cup Challenge series has been 25 years in the making and I’m extremely excited,” said Speakman.

“It has taken everything I have to gain this opportunity and now I’m seeking support from corporate Australia for this season and then Carrera Cup in 2014. I guarantee an extremely strong on track performance and return to sponsors.

“It has been incredibly frustrating sitting on the sidelines for the past 18 years knowing full well of my racing capabilities. Now that I have broken down the barrier that stopped paraplegics being allowed on Australian race tracks I intend to really show that I deserve a career in Australian motorsport.”

The 2013 GT3 Cup Challenge will take place at Mallala Motorsport Park in South Australia over the April 20-21 weekend.