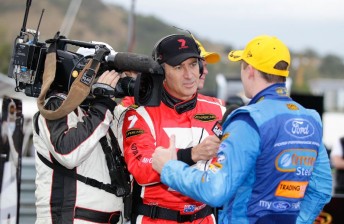 Seven will be back in the pitlane in 2013

V8 Supercars has last night finalised a deal to keep the sport on the Seven Network from this year.

“V8 Supercar fans should finally get news on the TV broadcast rights – that’s later today,” said Beretta during the 7am sports bulletin.

“With the Seven Network expected to extend its deal beginning with Adelaide’s Clipsal 500 in March.

“So very good news and V8 Supercar fans are going to be very relieved about that.”

The announcement 47 days prior to the Clipsal 500 and comes after many months of negotiations.

Speedcafe will have further details on the television deal later in the day.