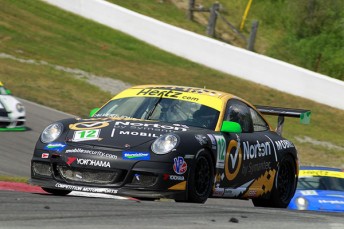 The driver line-up in the Class B contending GT3 Cup Car will be completed by Los Angeles-based Australian David Calvert-Jones, who in recent times has tailored GT outings in the USA around his work as a helicopter film and stunt pilot.

McElrea Racing, which ran a full-time program for Alex Davison and a one-off appearance for James in last year’s Australian Carrera Cup, will operate the car at Bathurst under the eye of Competition Motorsports owner Bob Faieta.

Alex Davison says the event will be a good chance for his cousin to show his ability on home soil after a largely US-based career so far.

“I believe we have one of the strongest driver lineups in the field,” said Alex Davison, who returns to V8 Supercars in 2013 with Charlie Swerkolt’s Ford Performance Racing prepared entry.

“James is a really talented driver who has not done a lot of racing in Australia, but we saw at the Australian GP in Carrera Cup last year that he can drive a Porsche very well and was on the pace quite quickly. This is a great opportunity for him to get some experience at Bathurst and show what he can do.”

Following the Bathurst race, the Competition Motorsports outfit will head to Daytona for the famed Rolex 24 Hours before embarking on its first full season in the American Le Mans Series.