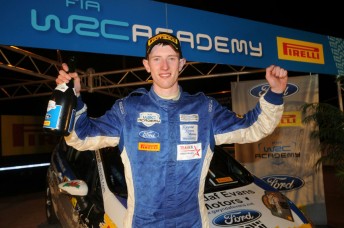 One of the brightest talents in world rallying, Elfyn Evans, has been confirmed as a starter at the National Capital Rally to be held in Canberra from 1 – 3 March.

Evans won the World Rally Championship Academy title in 2012, a series which pitted the best under 25 drivers against each other in identical front-wheel-drive Ford Fiesta R2 models.

The son of former British Champion Gwyndaf, 24 year-old Evans will drive for Innate Motorsport in an R2 Fiesta in a deal put together by the Australian importer of the model RSPORT Motorsport.

Evans will compete in the event ahead of starting his 2013 World Rally Championship program, the prize he won for taking the WRC Academy title.

“When I was approached to do the event I jumped at it,” said Evans.

“I want to be a professional rally driver, so an opportunity to gain international experience like this is valuable. My employer, M-Sport thought it was a good idea for my development and a break from our winter is an added bonus. I am taking the event seriously as the team is looking for a result for all the work putting a deal like this together takes.”

Innate Motorsport is looking forward to having the fastest driver in the world in an R2 Fiesta competing in Canberra.

“The opportunity to run Elfyn cements our place as a serious part of the Australian rally community,” said Coppin.

“I met him when I was in the UK last year and had a ride with him. He has the speed to be a serious contender in Canberra.”