Work to do for Chad Reed after Phoenix Supercross

Work to do for Chad Reed after Phoenix Supercross 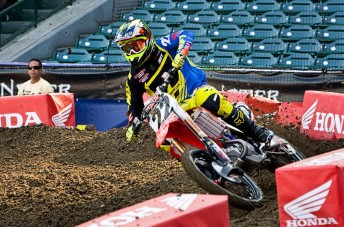 Australian rider Chad Reed admits he needs to improve his game to have any chance of winning the 2013 Monster Energy AMA Supercross title after another solid but unspectacular night at Chase Field, Phoenix.

The 30-year-old took a fourth-placed finish from the third round of the 450SX class championship, but now sits nine points adrift of series leading Suzuka rider Davi Millsaps.

Reed had earlier finished fourth in his eight lap heat race aboard his Two-Two Motorsports Honda.

“We have come away with some safe points but we really do need to step it up now,” he said after the main event.

“It’s no secret that I wasn’t happy with how I rode at A1 and while tonight I felt that I rode a bit better there is still work to do with the bike.

“We had a long debrief after the race tonight and will be back at the test track early next week.”

The season continues this coming Saturday at the Angel Stadium in California.