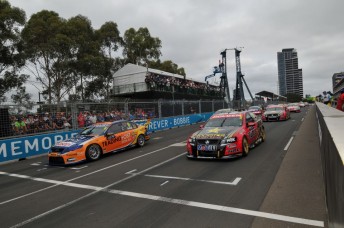 The V8 Supercars Championship remains without a television deal for its 2013 season as incumbent broadcaster Network Seven continues to add to its other live sporting commitments.

The network is also currently working on a deal to extend its Australian Open tennis contract beyond its 2013 expiry, with key executives understood to be highly enthusiastic about retaining the current $21 million per year deal.

Curiously, today’s horse racing announcement from Seven boasted V8 Supercars as part of its portfolio, despite a new agreement having yet to be completed.

“The partnership with TVN and the racing industry builds on Seven’s leadership in sports television and the network’s portfolio of major sports events, including the Australian Football League, the Melbourne Cup Carnival, The Australian Open and Wimbledon, the Sydney-Hobart Yacht Race, the Australian Open Golf, V8 Supercars and the Bathurst 1000,” read the statement in part.

The statement also emphasised the importance of live sport to the network, claiming that “at times there will be live sport on all three of our channels simultaneously (this year)”.

A Seven spokesman declined to comment when contacted by Speedcafe.com about the current state of its dealings with V8 Supercars.

V8 Supercars CEO David Malone told Speedcafe.com last week that the long and drawn out rights negotiations process is drawing near a conclusion, with the opening round of the season now little over six weeks away.

It is understood that James Erksine, a partner of former V8 Supercars co-owner Sports Entertainment Limited, has been assisting in the negotiations alongside advisory firm Greenhill & Co.

The delays in finalising a television deal have caused significant angst amongst the V8 Supercars teams, particularly those who are still working to lock in sponsors.

A two-year extension with Seven, continuing the current rate of approximately $30 million per year, is thought to be the most likely outcome.