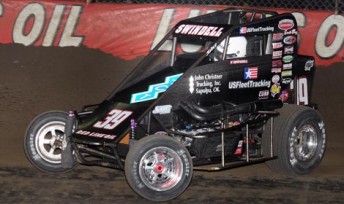 The Swindell family continues a rare stranglehold on arguably the toughest dirt track race in the world, the Chili Bowl with Kevin Swindell leading home his legendary father, Sammy to win his fourth consecutive winner’s trophy in Tulsa.

The race itself was a strong battle between the Swindell pair – who locked out the front row – and man of the moment in world midget racing, Kyle Larson.

The trio were three-wide at times on the tight indoor temporary track. Larson got to the lead over Kevin Swindell, the pair trading slidejobs, before Larson spun exiting the fourth turn on the 18th lap.

From the restart, Swindell – who will be in Australia for the Grand Annual Sprintcar Classic at the end of the month – built a massive 3.3  second lead before Larson brought on the ambers with another misdemeanour on lap 30. Being his second stoppage, he was removed from the race – not before a standing ovation from the capacity crowd.

Entering the final lap deep in traffic, Sammy was able to close the gap on his son to nothing. The elder statesman was given a further sniff when Kevin rode over Jason Meyers while trying to lap him. He was unable to get through though with Kevin taking his historic fourth consecutive Chili Bowl win.

“I tried to just get in line behind Jason [Meyers] and I think he had just kind of given up and he went in there real slow,” said Swindell post race. “I couldn’t even get slowed up that much and hopped over his right rear and the first nose I saw as black and all I thought was, well, there he goes.”

268 competitors entered for the three night event including competitors from Canada and Finland.