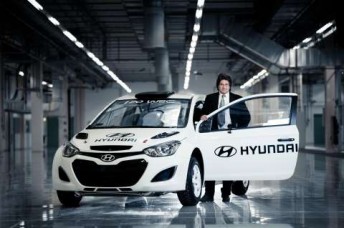 The re-emergence of Hyundai as a player on the World Rally Championship stage has taken another significant step with the addition of well credentialed Frenchman Michel Nandan as team principal.

Nandan has held key technical positions at WRC level since the 1990’s and is seen as a crucial plank to Hyundai making a successful return full-time return to the top level of the sport since it pulled out after 2003.

The Korean car giant is developing a WRC-spec i20 in a program Hyundai says will help promote the excitement and dynamism of its brand which has accelerated on the world stage in a short space of time.

“I am honoured to have been chosen by Hyundai to spearhead its exciting new entry into the WRC,” Nandan said.

“The project is still in its infancy but things are moving rapidly and I am looking forward to developing the team as this year progresses.”

An interim version of the i20 is already being put through its development phase in Korean to allow Hyundai to undertake component and suspension analysis.

Nandan, 54, said: “We are deliberately using an interim version of the i20 to carry out important component testing and to ensure that we have done our homework before we enter competition.”

Hyundai’s link in rallying began in 1998 when it competed in the F2 class for the WRC for two seasons then in 1999 it announced it would step up to the top class in 2000, when it ran a three-door WRC Accent until 2003.

Nandan has an impressive motorsport background which includes the test and development engineer in Super Touring and Rally for Peugeot Sport Italy from 1987-1990 and Toyota Motor Sports rally manager from 1991-1995. He was Peugeot Motor Sports technical director from 1998 until 2005.