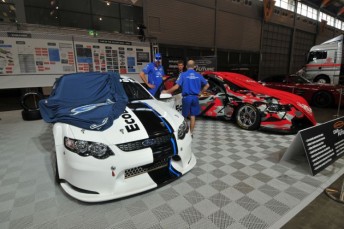 The 2012 V8 Supercars Championship was dominated by just two teams as Triple Eight and Ford Performance Racing shared all 30 race wins between them.

The oligopoly came in stark contrast to the previous season, where Stone Brothers Racing, Brad Jones Racing, Kelly Racing and the Holden Racing Team had also seen the top step of the dais.

Last year’s championship was undoubtedly impacted by the incoming Car of the Future regulations, with teams taking different approaches as to the timing and magnitude of the inevitable shift of resources towards the new-spec cars.

Kelly Racing was perhaps the biggest case in point, with its planned switch to Nissan, announced before the 2012 season had even begun, requiring the majority of its focus.

Stone Brothers too had a new manufacturer to contend with in the latter part of the year ahead of its new era as Erebus Motorsport, while the once mighty HRT made no bones about its determination to hit the ground running in 2013.

So how many teams will we see win races this season? Can the aforementioned teams return to their winning ways of 2011? Or will the likes of Garry Rogers Motorsport, Dick Johnson Racing, Tekno Autosports and FPR customer squad Rod Nash Racing, all of which saw success in 2010, taste victory?