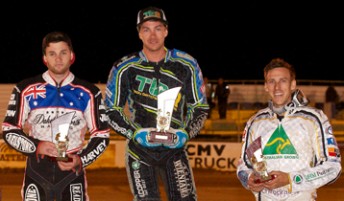 Queenslander Troy Batchelor has taken out his first Australian Speedway Championship ending the three round series undefeated after winning the final round at Kurri Kurri in the Hunter Valley.

Conducted in temperatures that were heading north of 40 degrees, Batchelor beat home local Newcastle hopes Jason Doyle and Rohan Tungate in the final with the revelation of the Championship, Dakota North finishing the final in fourth.

By virtue of his fourth placed finish, North ended the Title race in second – a superb result for the youngster.

At the completion of heat racing, Batchelor and Doyle were locked together on 14 point, with Batchelor getting the superior gate choice having defeated Doyle during their confrontation earlier in the night.

Tungate – who cut his teeth on the Kurri track – advanced to the decider from the B-Final where he led home Cameron Woodward (who secured third in the Title), Tyron Proctor and Micky Dyer.

A number of notables didn’t make it into the finals race, including Davey Watt, who ended his Championship run by missing the B-Final on countback. Others on the outside looking in included Sam Masters and Alex Davies.

The crowd was treated to a Championship fourth placed run off between Tungate and Doyle, with the result going the way of the former. This was critical for the World Championship Speedway Grand Prix qualifying series, which the top runners in the Australian Championship are invited to.

A dominant performance from Batchelor could not have come at a better time. Additionally, having finished second by just one point to Chris Holder in the past, to annex an Australian Title of his own is a huge milestone in his career.