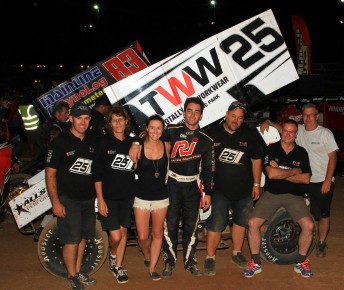 It was clear from when the flag went green on the 40 lap final that Murcott had superior pace to McFadden.

The Victorian’s Mainline Dynanometer’s car was able to place itself anywhere on the outstandingly prepared Archerfield surface and right through until late in the race, all thought a new Australian Champion was to be crowned.

The caution periods that can sometimes populate Australian finals just weren’t evident. A lap two caution for Danny Reidy closed the field early, then it wasn’t until lap 16 where there was another amber intervention for Ian Madsen, who slammed the wall whilst running in the top five after a collision with the lapped Brock Dean. Madsen had earlier advanced from the Bronze Shootout (pointscorers 5th to 8th) to start the final in fourth.

A case of mistaken identity from the officials following the Madsen incident sent emerging Victorian, Jamie Veal to the rear of the field after he had been running in the top 10, despite being nowhere near the incident (his car holds a very similar black livery to that of Dean’s). Understandably, Veal was furious post race.

Murcott held the pace from the restart and extended his lead. Whilst McFadden had a dalliance with the highline in his Totally Workwear machine, Murcott expanded the gap to the length of the front straight.

Approaching traffic, the critical moment in the 51st Australian Title came with 12 laps remaining. With both drivers running the lowline, Murcott made a small mistake coming out of turn two and it gave the determined McFadden enough to see that he had a chance at spoiling Murcott’s party.

Circulating for several more laps, McFadden got on racing terms with Murcott, the pair side by side for a period of time, before a decisive move for the lead could be made on the lowside into turn three with seven laps to go.

Murcott quickly drifted off the tail of McFadden, who had saved his rubber better for the gruelling 40 lap distance.

McFadden crossed the line from Murcott with Steven Lines coming home third after a spirited battle throughout the race with fourth placed Kerry Madsen and fifth finishing Robbie Farr.

Brooke Tatnell – who attempted to race his way forward from the C-Main, but was eliminated, chose to invoke his Champion’s lifeline and start from position 21 on the grid. He charged his way forward, crossing the finish line in an outstanding sixth placing. Showing the true mark of a champion, the first person to congratulate the top three as they approached the podium was the outgoing Australian Champion.

The B-Main finished in controversial circumstances. As the winner Trevor Green crossed the line, a backmarker rolled in turn two, triggering a red light. Simultaneously, fourth placed (and final transfer holder) Todd Wanless’ engine blew entering the final turn. Whilst he was passed before the finish line, given the red light, Wanless was granted a start in the Championship feature, which wasn’t popular among the crowd, but in hindsight was the correct decision. Joining Green in the finale were David Muir, Shaun Dobson and Wanless.

Frenetic activity took place as soon as Wanless left the track, with the Tyrepower team forced to change the detonated engine in time to get him on track for the A-Main. Paul Morris had his Supercheap Auto machine on standby should the Wanless crew not be able to implant the replacement engine, however the changeover was complete in quick succession and he started aboard his familiar steed.

Earlier in the evening, B-Main winner Green was at the wrong end of one of the true highlights of the three nights of competition. World of Outlaws professional, Kerry Madsen made a stunning late race lowline pass on Green entering turn one. There must have been mere millimetres between the two as Madsen aboard his Krikke Motorsports Cool Chassis advanced another position.

The C-Main was won by Ryan Farrell who took Ricky Maiolo into the B-Main with him. Former V8 Supercar driver, Paul Morris just missed out on a transfer in third.

By taking the Gold Shootout and therefore pole position in the A-Main, McFadden put together a very rare perfect Championship – fastest qualifier, preliminary night victory, highest point scorer, pole for the final and the Championship!

It was a rare, emotional McFadden that accepted the winner’s trophy and the inaugural Championship ring. He was quick to pay tribute to Murcott.

“He could put his car pretty much anywhere on the racetrack, he had the fastest car out there tonight, for sure,” said McFadden. “I’m very emotional standig here and taking this win while we were up against it. The crew that are behind me and my family mean everything and the success that I taste wouldn’t come without them.”

At a tender 23 years of age, McFadden continues to achieve so much against fields that include a majority of the best racers in Australia from the past two decades. The sky for the youngster at any level of the sport in Australia or internationally truly is the limit.

– A number of V8 Supercar drivers were among the capacity crowd at Archerfield, including Tim Slade, Dean Fiore and Michael Patrizi, whilst Paul Morris competed in his first Australian Sprintcar Championship.

– World of Outlaws drivers, Tim Kaeding and Jason Sides – who was in attendance with his sprintcar racing brother, Paul – enjoyed a rare few nights out of the cockpit for this time of the Australian summer. All were enjoying proceedings from the hill at Archerfield.

– Kerry Madsen’s manoeuvre on Trevor Green during their heat race was nothing short of remarkable. With no room below Green on the racetrack, Madsen was still able to find a way through legally, sparing millimetres either side.

– Weather conditions were less than conducive to preparing a clay speedway track, with temperatures soaring to the mid-30s, with high levels of humidity on each day of competition. Credit to John Kelly and the Archerfield track staff for building a track that was perfect throughout the title and provided two lanes of racing in the features.

– The maturity and racecraft of James McFadden continues to stun seasoned pundits. His ability to read a track and adjust within a lap is a rare talent that has existed among very few of his predecessors or peers.

– Young South Australian, Daniel Pestka was one of the most impressive racers throughout the Title, qualifying for the A-Main in 10th placing. He has backing from Gawler Farm Machinery’s James Rosenberg – who is the V8 Supercar REC owner for Tim Slade.

– It’s hard to argue that the cream doesn’t rise to the top in such events – the top 10 being populated with every competing Champion and the form drivers around Australia right now.

– The cars were brought onto the track to the dulcet tones of a Dame Edna Everage impersonator singing Simply The Best. Certainly a different type of pre-race entertainment for an Australian Sprintcar Title!