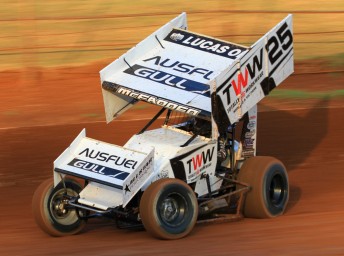 Former Australian Sprintcar Champion, James McFadden has shortened his odds as favourite for the 51st edition of the Title after a dominant night two performance at Brisbane’s Supercheap Auto Archerfield Speedway.

McFadden started the night by setting the quickest time in qualifying by a fair margin and from there the die was cut.

The frantic final saw McFadden get the best of the outside front row start – where he was alongside David Murcott – to take the lead. He soon had Robbie Farr in hot pursuit. The Perth-based Sydney-sider got around McFadden for a lap before the Totally Workwear #25 charged back underneath the Eastcoast Pipelines car.

On lap nine, a caution light for a fracas among lapped cars behind the leader closed the field up. Farr missed the incident by mere millimetres. Not so lucky was Max Dumesny.

The driver of the Valvoline #5 was setting for a sensational late race charge, however being run into by the spun car deflated his left front Hoosier and he was forced to watch the remainder of the race from the infield.

The yellow – the only of the race – was the worst thing to happen to Farr. Immediately from the restart, McFadden skipped away from the field.

David Murcott in the Mainline machine came on strong in the last 10 laps of the race. He got past Farr among traffic before setting sail for the defending World Series Sprintcars Champion.

McFadden had his own problems with three laps to go. He encountered a group of seven lapped cars that resembled the Brisbane-Gold Coast motorway on a sunny Friday afternoon. Whilst he did his best to try and work his way through, Murcott stuck to the highline and rounded the young firebrand in.

Heading into turn 3-4 for the final time, McFadden was unable to get any breaks, whilst Murcott had the momentum.

Crossing the line, McFadden won by half a car length from Murcott and Farr. Fourth placing went to Ian Madsen, who made up several placings and the super impressive Victorian Jamie Veal – who put in one of the drives of the night in his third heat to finish second from the back after being involved in a lap one altercation.

Defending Champion, Brooke Tatnell had a terrible night coming to grips with a different car and different team. A spin in heat two was backed up with being sent into a soft roll in his final heat after starting on the front row. He enters tomorrow night’s final round of heats with lots of work to do, being no less than 43rd in points.

McFadden and Murcott are equal at the top of the points standings after the two preliminary nights, with Farr – who was also a night two runner – third. The best of the night one competitors in the overall classification is Kerry Madsen in fourth, however he is 12 points behind tonight’s top two. A performance of note among the big names in the top 10 is that of young South Australian Daniel Pestka in the Gawler Farm Machinery car. A mature performance on night two – showing the benefit of chasing ENZED World Series Sprintcars this year – sees him enter the final night eighth on points.

The 51st Supercheap Auto Australian Sprintcar Championship will be decided at Archerfield Speedway on Saturday night.