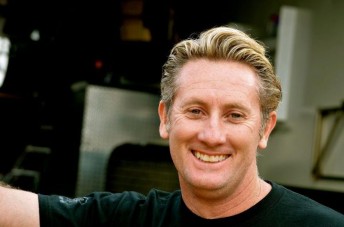 If there is a silver lining to Brooke Tatnell’s horror start to his Australian Sprintcar Title defence, it is that he can invoke a Champion’s ‘lifeline’ into tonight’s 40 lap A-Main.

Sprintcars Australia this morning confirmed to Speedcafe.com that ‘the defending Champion has the right to start rear of field if he/she fails to qualify.’

Tatnell enters tonight’s event in a lowly 43rd overall position and it is mathematically impossible for him to race his way directly into the 51st Australian Championship finale in tonight’s last remaining heat.

The Minnesota-based professional was involved in several uncharacteristic incidents during Friday night’s heats, including a soft flip in his third and final heat of the night when he was tipped into a spin after a first corner collision with Kevin Titman. Titman was deemed to be the cause of the incident and was sent to the rear of the pack.

Tatnell is considered to be an Archerfield specialist and won his second Title at the Brisbane venue in 2006. Even from the rear of the 20 car pack, he will have a good shot at defending his Championship.

Ironically, the last time the Champion’s provisional had to be invoked was back in 1994 at Warrnambool when Ron Krikke attached himself to the back of the pack. Krikke’s nephew, Shane, was Tatnell’s previous team owner and won Thursday night’s preliminary event with Kerry Madsen behind the wheel of his #2 machine.