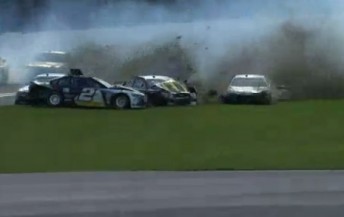 12 cars were involved in the wreck

Australia’s Marcos Ambrose has been at the head of a 12-car wreck during pre-season testing at Daytona International Speedway.

The Ford driver was tapped by Dale Earnhardt Jr. to trigger the 12-car accident that essentially shut down the three-day test session.

The 2013 Sprint Cup NASCAR has a number of new elements, including different shaped front and rear bumpers to stop the two-car drafting that has dominated racing at Daytona and Talledega over recent years.

NASCAR’s most popular driver was under the rear of Ambrose’s car and it acted ‘like a forklift’ and turned the Aussie into the wall and then back across the track in front of the field.

“I had junior pushing me. He’s just a great drafter, really can feel it well,” said Ambrose.

“I guess I just got caught on the edge of the bumper there and with the shaped noses and the tyres, just spun me out. It was hardly even a bump. It was just enough at the wrong angle, wrong time and just went for a spin.

“I feel bad for everybody because quite a few cars were torn up there. But we’ll repair this one and probably build a couple new ones and get ready for Speedweeks.”

“The sport advanced to the two-car tandem three or four years ago and there were certain things you could do then that you couldn’t do in the past without wrecking,” said Keselowski.

“Now the rules package is back to where we were in the early 2000’s when the fans enjoyed the racing better. I think we as drivers have to rewind to how we used to drive those cars.

“You make mistakes and learn and that is part of it. I might be the guy that makes the mistake next time so I can’t be mad about it. It is unfortunate that there are torn up cars but let’s be honest, it is January and we have another month-and-a-half to build them right.”

The wreck caused several teams to pack up and leave Daytona, and ended the pack racing that NASCAR wanted to see to evaluate its redesigned cars.

Check the video of the accident