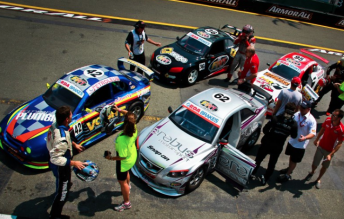 The Aussie Racing Cars will see as many 12 brand-new cars compete in its 2013 series.

The Queensland-based category is currently building its new cars, largely for a crop of new competitors who will join the popular series.

Of the new chassis, five Toyota Aurion bodied cars are being built, while seven Holden Cruzes will make their debuts this year.

The series has seen an unprecedented amount of cars change hands over the off-season, and with the addition of the new cars, category manager Brad Ward is looking forward to the category’s biggest year yet.

“There’s no other category that have had this type of growth. There will be a lot of new faces involved which is important for us to have new people racing,” Ward told Speedcafe.com.

“The Aussie Racing Cars has always had the objective to have new people involved and we’ve got a few new competitors – some young guys coming out of karting, and a few older guys keen to get involved.”

The Holden Cruze made its debut in the class late last year in the hands of Jack Perkins. Ward says that having the support of Holden is crucial for the class to move forward, and hinted that another manufacturer may enter the class this year.

“They’ll be seven Holden Cruze, and it’s great to have factory support for the 2013 season,” he said.

“They’ve chipped in and they see value in the series, just like Toyota did three years ago.

Series entries opened last week, with as many as 40 entrants expected for the opening round at the Clipsal 500 on February 28-March 3.