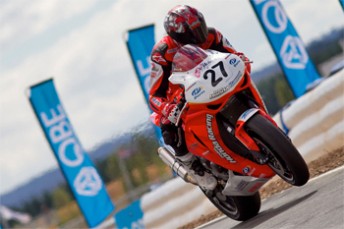 Australian Superbike riders Jamie Stauffer and Glenn Allerton will compete in the opening round of the World Superbike Championship at Phillip Island as wildcards.

After finishing third and fourth respectively in the 2012 Australian championship join a 16-strong field at the Island circuit for the February 24-26 event.

The pair will be the only Australians racing in the World Superbikes in the opening round, with no confirmed Aussies for a full-time seat.

Stauffer will ride a CBR1000RR for his Team Honda Racing, while Allerton will line up on his Hepburn BMW S1000RR.

Stauffer, 33, is looking forward to testing himself against the world’s best.

“My career has seen me race both in Australia and overseas and I have had a lot of success, but to have the chance to race against the world’s best Superbike riders starts my 2013 season off with a terrific challenge,” he said.

“I’m really excited about the prospect and I have every confidence that Team Honda Racing will provide me a strong set up in the CBR1000RR so that I can give it 110 percent and be competitive.”

Allerton’s start will be his world championship debut and is confident he can be competitive.

“It has always been a dream of mine to compete on the world stage and to compete against the best rider in the world,” he said.

“It has been a long time waiting and the team and I really appreciate the opportunity that we have been given and are going to give it our best to show case what talent we have in Australia.”

Other Australians competing on the world stage at Phillip Island will be in the World Supersport category, where James Hook and Kevin Curtain will ride a Honda and Yamaha respectively.