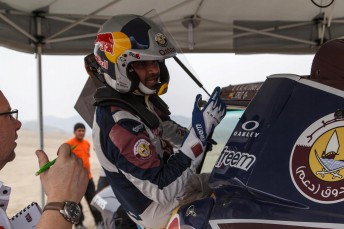 The battle up front in the Dakar Rally is well and truly on after Nasser Al Attiyah won the 438km stage from Araca to Calama in Chile.

The Qatari wiped over eight minutes off the lead of Stéphane Peterhansel with the gap down to 78 seconds as many crews had issues with heavy sand.

“We just try to keep going like this and we try to keep close to Peter because maybe tomorrow the stage might not be for us, but okay, if we lose, we lose just a few minutes. We can feel the altitude, but we have a good ratio and we fixed it yesterday for altitude to keep the RPM always very high.”

As good as it was for Al Attiyah, it us all over for WRC legend Carlos Sainz who has retired his Buggy with engine issues.

Geoff Olholm is still the best placed Australian, although he did lose two places to be 15th overall. Bruce Garland climbed five spots to be in 41st while Isuzu team-mate Adrian Di Lallo jumped eight spots to be 43rd.

On the first full day in Chile it was local rider Francisco Lopez who took honours on two wheels.

‘Chaleco’, who had three other KTMs hot on his heels ridden by Ruben Faria, Cyril Despres and Kurt Caselli. Despres is two and half minutes behind Olivier Pain.

The Chilean rider had some concerns with a drop in power.

“The first part of the special went very well, but on the second section, the engine lost a fair bit of power and I started wondering whether it was a fuel problem or due to the altitude,” said Lopez.

“I don’t know, but I should find out when I get to the bivouac”.

In the quads Ignacio Casale also flew the Chilean flag by achieving the best time ahead of Marcos Patronelli. Following the problems encountered by Sebastian Husseini yesterday, the young Chilean gained time by beating Patronelli by six minutes, but the gap is 77 minutes.

Gerard De Rooy took his fourth stage victory in this year’s Dakar in the trucks. The title holder witnessed the Kamaz trucks starting to find consistency. Stage 6 saw De Rooy’s team-mate affected by major problems, with former winner Hans Stacey rolling his truck over forwards! Although Stacey managed to get his truck back on track, the race lead is now way out of reach for him.
Day 6 highlights