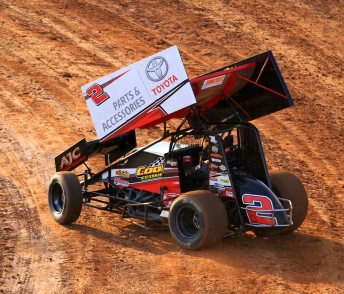 Australian World of Outlaws star, Kerry Madsen has got his 2013 Australian Title campaign off to a perfect start taking victory in the night one preliminary feature for the 51st Australian Sprintcar Championship at Brisbane’s Supercheap Auto Archerfield Speedway.

After getting away from the start in the lead, Madsen was quickly rounded up on the tight Archerfield bullring by Lines, who elevated himself to the lead on lap 10.

He held onto this position until the 13th circulation when Madsen regained the ascendency.

From there, the winner of five World of Outlaws main events during 2012 didn’t look like being headed, taking an easy victory.

The real interest was the battle for second however, with Lines falling back into the clutches of Andrew Scheuerle. The Toowoomba racer got around Lines into second for more valuable points ahead of Saturday night’s finals.