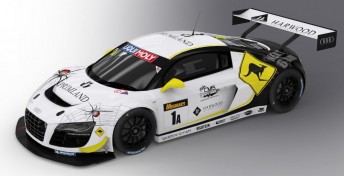 German Audi squad Phoenix Racing will next month aim to defend its Liqui-Moly Bathurst 12 Hour crown with a fresh trio of European hotshots behind the wheel.

Although lacking the factory backing enjoyed during last year’s successful campaign, the team looms as the favourite to retain its crown.

The 37-year-old Primat is an accomplished prototype sportscar racer who competed in last year’s World Endurance Championship with Rebellion Racing after a three-year stint with the factory Aston Martin outfit.

Kristoffersson, meanwhile, shot to prominence in 2012 by beating the likes of Tonio Liuzzi and Gianni Morbidelli to the International Superstars Series title in an Audi RS5.

Simonsen, the youngest in the line-up at 23, is a Phoenix Racing Audi regular in the German ADAC Masters as well as various international endurance races.

With each car required to have at least one driver not deemed as professional or semi-professional by race organisers, the line-up is sure to raise eye-brows amongst rival teams.

“Unlike a year ago, when Bathurst was still unknown territory for the team, Phoenix Racing is now able to draw on a certain amount of experience,” he said.

“The GT3 competition is incredibly strong. We’re expecting a tough battle for the podium places and are eager to see what surprises Bathurst – after last year’s changeable weather with rain and fog – have in store for us this time.”

Among Phoenix Racing’s opposition will be a two-car Audi assault from local outfit the Melbourne Performance Centre, whose driver roster includes Christopher Mies, Craig Lowndes, Warren Luff and Mark Eddy – all of whom drove with Phoenix in 2012.