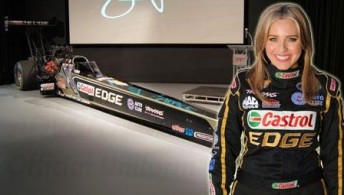 For the first time in its 35-year NHRA history the John Force Racing Team will field a Top Fuel dragster sponsored by Castrol EDGE and driven by 26-year-old rookie Brittany Force.

With an impressive record of 217 NHRA Funny Car races and 17 Winston, Powerade and Full Throttle Funny Car championships, JFR welcomes Brittany, who becomes the third of John Force’s daughters to race professionally, joining sisters Courtney and Ashley Force Hood who have previously raced with their father in Funny Cars.

“It really is a big honor to be the first to drive a Top Fuel dragster at John Force
Racing,” said the 26-year-old who will be the third Force daughter to turn pro. “This
team has done so much over the years to evolve and adding a Top Fuel car into the mix
I believe will help us continue to grow as a team.

“Being able to drive the first JFR Top Fuel dragster with my dad’s support and with Castrol Edge as my sponsor is still very surreal to me, but I think it’s something we’re all excited about, and I’m going to do the best job that I can.”

Meanwhile, Force confirmed that he will be re-united with the NHRA this season in his pursuit of the Mello Yello Funny Car championship with crew chief Mike Neff. He will be joined by daughter Courtney who, after earning Rookie-of-the-Year honors, will be back in the Traxxas Ford for crew chiefs Ron Douglas and Dan Hood, and son-in-law Robert Hight, who will start his ninth season in the Auto Club Ford for Jimmy Prock and new assistant crew chief Danny DeGennaro.